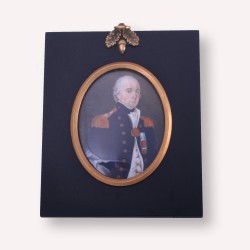 Although overshadowed by his illustrious contemporary, friend and colleague Horatio Nelson; Cuthbert Collingwood (1750-1810) enjoyed an equally distinguished career at sea. After serving with Nelson in the West Indies, the two officers fought alongside each other at the battle of Cape St Vincent in 1797. Following a brief meeting in England in 1800, the two did not see each other again until Nelson superseded Collingwood, by now a rear-admiral, as commander of the Channel fleet in the weeks before Trafalgar. Collingwood led his division with great daring and skill at the battle, leading the attack in Royal Sovereign. When Nelson fell at the height of the action, Collingwood assumed command securing victory for the British. Subsequently he continued in post as commander in chief of the Mediterranean fleet, remaining almost continually at sea until he died exhausted in March 1810. Such was the public regard for Collingwood that, like Nelson before him, his body was returned to England where it lay in state at Greenwich before being interred with great ceremony directly beside Nelson’s sarcophagus in the crypt of St Paul’s Cathedral. Unlike Nelson, Collingwood shunned celebrity and few portraits of him exist. So I was delighted to handle the sale from a private collection of a rare miniature of the admiral by Charles Frederick de Brocktorff (1775-1850) after a portrait by Giuseppe Politi. Included also was an exceptionally rare gold and enamel mourning ring set with jet and mounted with a lock of the admiral’s hair, and a fine silver pint mug ordered by Collingwood after Trafalgar and emblazoned with his newly augmented coat of arms following his elevation to the peerage. Alongside his family crest is a further crest representing the stern of Royal Sovereign, whilst the shield incorporates the name of the action which secured his fame, and his name for posterity. 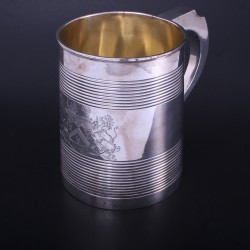 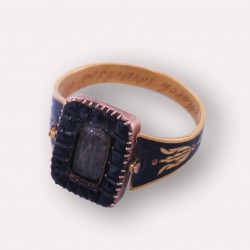 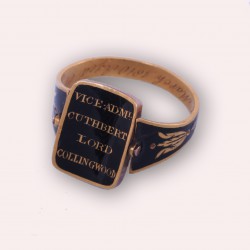