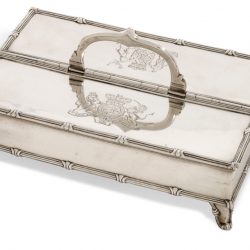 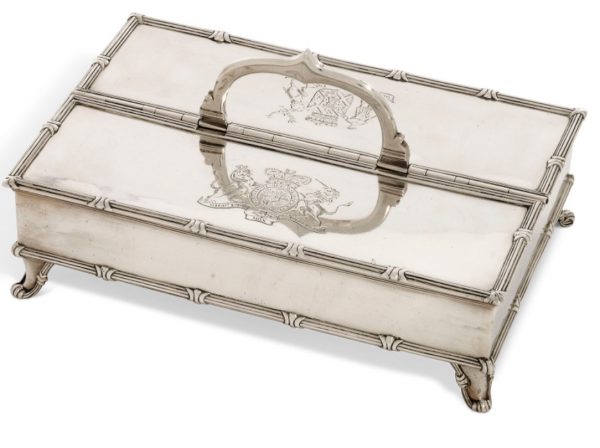 Rectangular on four scroll feet, the double hinge cover with swing handle and engraved Royal arms of King George III and a coat-of-arms under a coronet of STEWART quartering another with Hobart in pretence for Robert Stewart, Viscount Castlereagh, later 2nd Marquess of Londonderry (1769-1822) and his wife Amelia (Emily), daughter of John Hobart, 2nd Earl of Buckinghamshire, whom he married in 1794; the interior fitted on one side with three compartments with a glass inkwell and sander with silver covers, marked underneath, all covers and handle, Length 30cm.; weight 93 oz.

This inkstand belonged to Robert Stewart, Viscount Castlereagh who played a central and defining role in the Napoleonic Wars and was arguably Britain’s greatest ever foreign secretary. He used it on a daily basis throughout the war to correspond with monarchs, statesmen and military leaders around Europe: from Nelson and Wellington to Tsar Alexander I, Kaiser Frederick William III of Prussia and Emperor Francis I of Austria (even Napoleon in extremis wrote to Castlereagh, without apparent reply).

The inkstand was a perquisite of office granted to Castlereagh when Prime Minister William Pitt, a close ally and friend, made him secretary of state for war and the colonies in July 1805. It resided on his desk at 12 Downing Street where Castlereagh interviewed Admiral Lord Nelson before the admiral departed on his final, fatal mission. Waiting outside the office Nelson had met Sir Arthur Wellesley, the future duke of Wellington, the only occasion the two heroes of the war would meet. Castlereagh continued to corresponded with Nelson at sea composing his final letter (in reply to Nelson’s of 13 October) a day before news of the admiral’s ‛great achievement and fall’ at Trafalgar reached London on 6 November 1805.

Ten years later and now foreign secretary, Castlereagh received and replied to frequent letters from Wellington ahead of the Battle of Waterloo and Napoleon’s final defeat. Fellow Irishman Wellington would probably not have been at Waterloo without his friend’s patronage and encouragement. Following the victory, Wellington’s sent his battlefield dispatch post-haste to Castlereagh in London where, the minister not being at home in St James’s Square, it was famously intercepted by the Prince Regent dining nearby.

On hearing the dramatic news, Castlereagh travelled immediately to France to co-ordinate the allied negotiations which resulted in the Treaty of Paris on 20 November 1815. Lauded as the architect of the treaty, and of the congress system which sought to moderate conflicting interests in post-war Europe, Castlereagh was showered with gifts, titles and awards. In an unusually extravagant gesture for a man otherwise noted for his austerity of manner, in 1817 Castlereagh arranged for no less than twenty-one of the precious boxes he received from sovereigns to be melted and re-formed by Rundell’s, the royal goldsmiths, into a magnificent gold inkstand.  Castlereagh’s decision to commemorate his achievements in an inkstand shows the high status he attached to this most evocative, useful and vital desk accessory.

As a perquisite of office, Castlereagh may also have been mindful that on retirement  he would be expected to surrender this silver inkstand back to the royal jewel house (which officially still owned it).  In fact, following Castlereagh’s suicide, both inkstands remained with his family until the gold example was acquired in 2003 by the V&A, partly in lieu of tax, for £650,000 and this silver example by descent in 2019.

Purchased in 2022 by The National Trust for the collections at Mount Stewart, County Down.