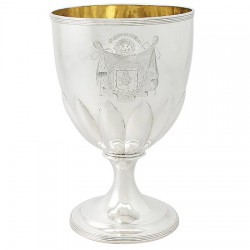 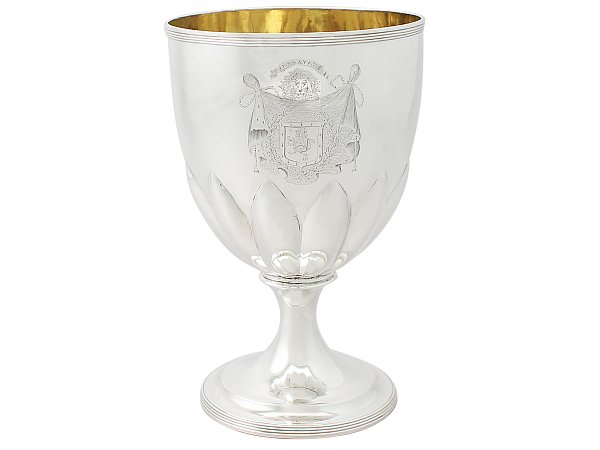 A large silver cup, plain with tapering half-fluting and reeded edge standing on circular foot, engraved with a coat of arms within an oak wreath and robe mantling; by Solomon Hougham, London 1802.

Arms: Argent a lion rampant gules a bordure ermine a crescent for difference (for Dundas) over all an escutcheon of pretence Sable on a chevron between three oak trees eradicated or as many martlets of the field (for Wood)

This silver cup belonged to Captain Thomas Dundas RN (1765-1841) who commanded the British frigate HMS Naied at the battle of Trafalgar. As great-great grandson of Robert Dundas of Arniston, Thomas was scion to the powerful Dundas family who dominated political and legal affairs in Scotland for nearly two centuries. Born at Keith in East Lothian, Dundas joined the Royal Navy in 1778 seeing action early in his career during the American Revolutionary War. By the outbreak of war with France in 1793, Dundas was lieutenant gaining promotion to commnder on 2 September 1795. His gained his first command a year later when the sloop HMS Merlin was commissioned. Within months, Merlin shared in the capture in the North Sea of the French warship L’ Augustine during the re-taking of the English merchantman Nelly which was being carried off as a prize by the French.

Made post-captain on 9 July 1798, Dundas took command of 20-gun HMS Prompte sailing to the West Indies where he captured a valuable Spanish whaling vessel and then the warship Urca Cargadora. Dundas was back in England by 18 December 1800 when he married Charlotte Wood (1779-1848), daughter and co-heir of Lullam Wood of Rochester, Kent (her family’s coat of arms appear in pretence on her husband’s on the silver cup).There were no children of the marriage.

Back at sea, Dundas, now in command of in HMS Solebay, escorted a convoy of British merchantmen to the Mediterranean before returning again to England in July 1802, three months after the signing of the short-lived Peace of Amiens.

When war resumed, Dundas took command of HMS Naiad, the 36-gun frigate in which he would gain his greatest fame. Stationed in the English Channel off the West coast of Spain, Naiad took several small prizes before seizing in January 1805 Nuestra Senora de los Dolores, a Spanish ship carrying over 200,000 dollars in specie plus other valuable goods. Dundas took his prize into Plymouth before returning immediately to his station where Naiad oversaw the capture of the Dutch schooner Der Vriede then took Mars on 25 June. The next month, assisted by HMS Pickle (soon-to-be famous for carrying the Trafalgar dispatch back to England), Naiad captured two further enemy vessels then in September, seized Wells, an American ship running goods through the blockade to France.

By early October 1805, Naiad was attached to a small squadron of frigates charged by Admiral Lord Nelson with disrupting supplies to the combined enemy fleet at Cadiz. However, they were unable to prevent the enemy departing Cadiz on 20 October for a final and devastating confrontation with the British fleet under Nelson’s command.

On the morning of the 21st, as the fleets drew towards each other, Nelson summoned his four frigate captains, Dundas included, to his flagship Victory for a final briefing of their roles during the imminent action. He was present as Nelson asked another of the frigate captains, Henry Blackwood of Euryalus, to witness a codicil to his will in which he (in vain) entrusted his mistress Emma, Lady Hamilton to the care of the nation in the event of his death. Dundas was also on board to see Nelson give the order, at about 11.45, for the famous signal “England Expects That Every Man Will Do His Duty”. Shortly before the firing commenced, Dundas left Victory and returned to Naiad carrying final orders and messages to distribute to the captains of the warships. He was, therefore, among the last men to talk with Nelson before the admiral was fatally wounded around 1pm.

During the early part of the action, Naiad, as instructed, lay off to windward with the other frigates to observe the battle and relay messages as required. As the fighting grew fierce, Dundas sent his boats into the water to recover the wounded. However, his most significant and difficult challenge of the day was taking HMS Belleisle in tow. Belleisle had been the second ship into action behind Royal Sovereign in the lee column of Nelson’s attack and as such had faced a terrible early onslaught from the enemy. Belleisle was the only British warship to be completely dismasted during the battle and had also suffered appalling casualties. Having established a line, Dundas hauled away but as the weather worsened in the aftermath of the battle the ships became separated from the British fleet, in danger of capture and of being driven ashore by the gale. Several times the line broke and had to be re-established with great difficulty. On the evening of the 22 October, after colliding with Belleisle endangering both ships, Dundas cut the line leaving both ships, Belleisle on a jury rig, to try and survive the storm on their own. Somehow they succeeded, despite Naiad losing almost all her sheets during the night, and the next morning they re-established contact, and a line, with Dundas then heading straight for Gibraltar (where Victory was also towed after the battle) reaching the safety of the harbour during the afternoon of the 23 October.

Dundas remained in Naiad until 1808, later commanding HMS Africa, a Trafalgar veteran; and the 74 gun HMS Vengeur. He was made rear-admiral on 27 May 1825, vice-admiral on 10 January 1837 and appointed and invested as a Knight Commander of the Order of the Bath on 13 September 1831. He died in Reading, Berkshire on 29 March 1841.

For his services at Trafalgar, Dundas was awarded a Lloyds Patriotic Fund £100 presentation sword which is now in the collection of the National Maritime Museum, Greenwich.

SOLD TO A UK PRIVATE COLLECTOR